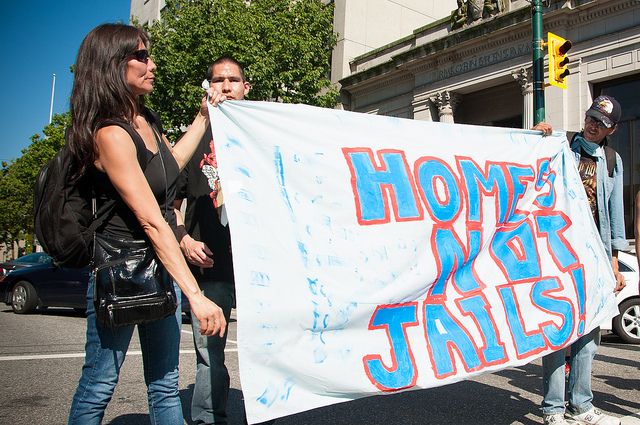 Domestic violence and homelessness are an increasing problem in recent years because of the worldwide recession. Cases of domestic violence, not only in the United States, but worldwide, are skyrocketing. In this country, 1.3 million women are domestic abuse victims each year. Over 4 million dollars is spent every year on medical and mental health costs for women who are victims of domestic violence.

Nearly 30% of all the families who are homeless in this country were domestic abuse victims.

Domestic Violence and Homelessness Have a Causal Link

Many women in abusive relationships often don't have a place to go when they leave their abusers. Women who don't have many resources or their own income, are more likely to become homeless. It's a statistic that also applies to thousands of children in this country.

Shelters Find It Difficult to Alleviate Both Domestic Violence and Homelessness

Many homeless shelters around the country for battered women and their children have limitations as far as thenumbers of people they can accept at anytime, so that brings up another issue which contributes to the problem.Since a lot of women, especially with children, can't find shelters to take them due to a lack of information,misinformation, or lack of local resources, these women determine that it's either stay on the street or go back tothe abusive spouse.

Some towns and cities have tried to alleviate the problem of domestic violence and homelessness by giving women vouchers for local motels, so they at least have a place to stay on a temporary basis. However, since they're homeless, it takes them much longer to find permanent housing. In numerous cases, property owners are hesitant to rent an apartment or house to a woman who's been a victim of abuse through no fault of her own. They believe that a violent incident may occur on their property, so many of them are turned away.

A number of studies have been done in regions around the country regarding domestic violence and homelessness.

One of the biggest factors contributing to the problem of housing for victims of domestic violence and homelessness is that many women from abusive relationships are from low income backgrounds. In many cases they have bad credit records. Many of the women in this situation don't have good employment histories because they've had to miss so much time at work due to the violence and abuse. As many employers allow for a limited number of days out of work, these victims go from one job to another.

Another serious problem is that some abuse victims are unfairly discriminated against. Some property owners arehesitant to rent an apartment or house to a woman who has a protective order out against a husband or boyfriend. Ifany incidents occur at the rental property, the woman and her children could face eviction for being victims ofabuse.

The U.S. Department of Housing and Urban Development is making strides to assist women and their children who are victims of domestic abuse. HUD has issued a statement about people who are evicted from housing or are deniedhousing as a direct result of domestic violence. The Fair Housing Act gives HUD the authority to investigate to determine if the denial of housing was gender based, or involved a federally protected issue.

The Violence Against Women Act gives a certain degree of protection to victims of domestic violence and homelessness who are being discriminated against. The Violence Against Women Act of 2005 helps protect women from indiscriminately being evicted. The Act prohibits Public Housing Authorities from denying victims of domestic abuse or stalking, fair housing. Vouchers are used for housing, and if a woman and her children must move from an apartment to protect themselves from an abuser, she may keep the voucher to use on another apartment.

Many women and children who are in the welfare system are victims of domestic violence and homelessness. They are all at risk of experiencing more violence at the hands of their abusers, or being subjected to life on the streets, unless programs enabling them to live in affordable housing are implemented.

The welfare system should work with other agencies to recognize that domestic violence prevents many women fromfinding stable jobs that will provide the income they need to care for their families.

Conclusion: More Resources are Needed for Victims of Abuse

More ways to combat homelessness of domestic abuse victims should be explored. More short term and long term housing must be available to abuse victims and their children at rates that are affordable to them.

Domestic Violence Shelters provide a safe haven for abused women and children, but only provide a short term solution to the problem of domestic violence and homelessness. However, safety in a shelter is the first step in helping abuse victims to get control of their lives once they're free of the relationship. Advocates should seek additional avenues as resources for these shelters to aid the persons in their care.