The Explosion Phase is when a domestic violence cycle incident occurs. It is the stage of the domestic abuse cycle that results in physical violence. Sometimes there may also be an explosion of aggressive verbal assault or emotional abuse, which should also be reported, and the victim should seek immediate help.

This explosion of violence or abuse is also referred to as the incident phase and follows the period of calm in the Honeymoon Phase and then the tension building phase.

There can be screaming, hitting, breaking possessions and hurting the pets in the household. While it does not always evolve into physical abuse as mentioned above, it is definitely an escalation of abusive behavior that almost always will occur at some point in the cycle.

Why? Because, this escalation phase with a major incident occurring is a tool of the abusive partner that allows for other forms of manipulation and control that will be used later. Fear is a powerful agent of control and manipulation. This method of escalation is done by instilling fear in the woman, or in some cases the man or child involved. 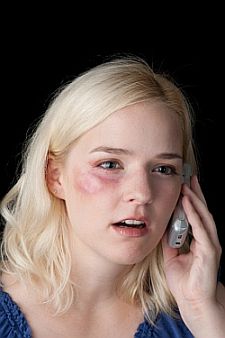 Sometimes an incident can lead to devastating violence and even death.

The abuser often blames the abused for the response. It is the trigger to begin the physical abuse and increasing emotional abuse. It is at this point that the abused person should take steps to remove herself from the relationship before it is too late. Unfortunately, this does not usually happen after the first time the physical abuse occurs. Hope, love and fear keep the partner in the relationship.

The abused still loves the person. They do not love their behavior. They believe that there is still hope that things will change, and everything will be as it once was. That is their hope. They may be in fear of the person if they choose to leave. This is the result of threats that have been made by the abuser.

The abuser will often tell his partner that it will never happen again. This is the first and only time. It is not unusual to blame the abused partner for provoking the argument. If she had behaved, it never would have happened. The abused may lack the self-esteem to handle the abusive phrases, and they will break down and submit to the abuser. Eventually, the abused partner may begin to feel the insults are true. As their opinion of themselves deteriorates, the abuse can often escalate.

Get help before another domestic violence cycle incident occurs.

Video about Characteristics of the Cycle of Domestic Violence