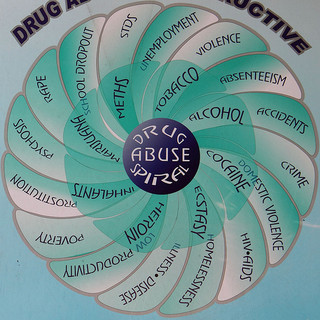 When looking at domestic violence and drug abuse statistics, it becomes very clear that abuse of drugs is something that can be shown to occur with a relatively high frequency among those who are battered or batterers. A large number of drug users also state that they have experienced some form of abuse at some point in their lives, and that they may also have witnessed their abuser using drugs or drinking.

Studies do not claim that substance abuse causes domestic violence, but rather that it can aggravate the already dangerous situation because the drug user has impaired judgment and lacks the ability to tell how really violent they are being. They may also become oddly detached from the situation or view it as being unreal while they are on a drug trip, and thus not stop themselves when they might otherwise do so.

Drug use alters brain chemistry and behavior, leading to long term changes in both the people involved in domestic violence.

Treatment plans for both domestic violence and drug abuse need to be jointly developed to be fully effective. This is undisputed. In fact, experts in both fields state that they would offer cross reaching services if they had the money and staff to do so. This is plainly clear if you look at the NCADV documents, which state that the Department of Justice found that while the vast majority of domestic violence programs for women would like to offer drug abuse services they lack to funds to do so. You can access their brochure at http://www.ncadv.org/files/SubstanceAbuse.pdf.

According to a number of researchers between twenty five and fifty percent of the men who are abusers in domestic violence cases have substance abuse issues (Gondolf, 1995; Faller, 1988;Leonard and Jacob, 1987; Kantor and Straus, 1987; Coleman and Straus, 1983; Hamilton and Collins, 1981; Pernanen, 1976).

Cycle of Domestic Violence and Drug Abuse Worsens Over Time

This is a huge social and economic issue, as one of the stresses that cause domestic violence is money, and illegal drugs cost huge sums to maintain a habit sometimes. The stress then of limited finances is exaggerated by the additional resource drain taken in maintaining the substance abuse, the inability to maintain a job because of the drug abuse, and other related factors.

Additionally, those who have been abused are more likely to use drugs to escape their situation, leading to additional stress down the line and escalating violence. Victims of domestic violence and drug abuse from partners are prone to using drugs to medicate themselves, on average nine times more likely then someone who has not be subjected to domestic violence (Shipway, 2004).

As many as sixty-nine percent of women in substance abuse programs relate being sexually abused as children (Fazzone, et al). Repeatedly researchers come up with the same thing; abused children tend to turn to domestic violence and drug abuse as adults in order to cope with their history of abuse. Women who are abused turn to drugs to help them survive the situation, which leads to consequences; like them stealing and their spouse becoming ever more controlling and abusive.

This can be seen in how drugs often act on personality, as these substances often lower inhibitions leading to more aggressive behaviors, and how they can serve as a crutch for those who involved in domestic violence and drug abuse, as those abusive blame the substance for their actions. Empirically, both men and women blame the drugs. The U.S. DHHS reports that substance abusers can be more violent and inflict greater injury then sober abusers. In addition the drug culture is often more prone to violence anyway then the mainstream cultures.

The Link Between Domestic Violence and Drug Abuse

The link between domestic violence and drug abuse is more casual than direct, as abuse of drugs is not usually something that causes domestic violence. Indeed, solving the substance abuse issue does not magically cure the abuser of violent acts or prevent the abused from seeking out similar behaviors as those that exposed them to domestic violence in the first place.

Because children who witness abuse tend to seek out partners who are like the abuser, this can further the cycle of abuse, which is compounded by substance abuse. According to research, even though women who abuse drugs are more likely to be abused (Miller et al., 1989), there is no hard fast correlation that states drugs cause abuse.

In another report, Collins and Spencer state that 36% of victims in domestic violence programs had substance abuse issues and experts agree that the risk of violence increases when both spouses abuse drugs or drink (Collins and Spencer, 2002).

According to Dembo, et al., when someone is physically abused as a child they are more likely to abuse drugs as teens and young adults (Dembo et al., 1987). It is also a known fact that substance abuse reduces the ability of the user to protect children in the home in the case of domestic violence (Reed, 1991). Public servants, like doctors and teachers also report that children are three times more likely to suffer abuse where both domestic violence and drug abuse are present with a parent (Hayes and Emshoff, 1993).

Being aware of the domestic violence and drug abuse cycle through education can help break the cycle, and this education needs to be part of the general education plan for all children, whereby students can recognize the cycle and make choices at a young age that can help them break it. This is no guarantee that abused children will not become abusers themselves, but it may assist them in seeking professional help instead of turning to drugs and self medicating.

What Visitors Have Said About Drug Abuse and Domestic Violence

Click below to see stories from other visitors to this page about how drug abuse has contributed to domestic violence and abusive relationships.

My name is Timothy James King, and I want to start by saying yes, I am the abuser. The reason why I'm doing this is that I've done this to two families. …

Why Do I Behave Like Its Normal When I Know Its Not? Not rated yet
I slapped him first. I was outraged. He had been drinking all night. He told me he would only have one glass tonight and come to bed, but I heard him drinking …

The Ring and the Abuse Not rated yet
He was beautiful, smart, witty and incredibly sexy. I was hooked completely, and he knew it. It didn't start out horrible like most stories didn't. When …

Resources and references for this page:

Hamilton, C.J., and Collins, J.J., The role of alcohol in wife beating and child abuse: A review of theliterature. In: Collins, J.J., ed. Drinking and Crime: Perspectives on the Relationship Between AlcoholConsumption and CriminalBehavior. New York: Guilford, 1981. pp. 253-287.

U.S. Department of Health and Human Services, Administration for Children and Families. (2002) "Substance Abuse and Child Maltreatment." National Clearinghouse on Child Abuse and Neglect and Information.