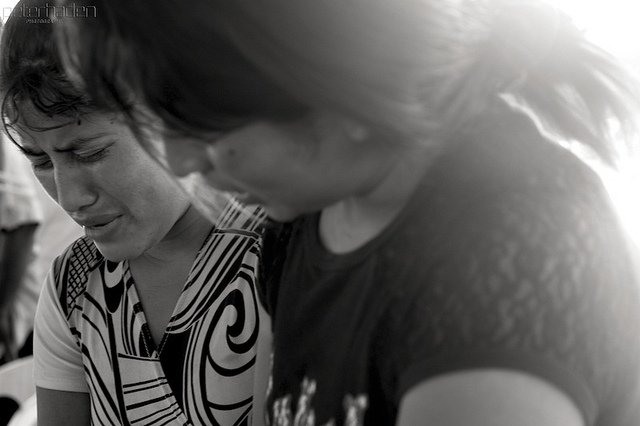 Domestic violence and poverty are both part of many people's lives all over the world, regardless of the culture or background. However, some social demographics are more likely to experience domestic violence on a daily basis that others, and poverty is one of areas that has an impact.

Poverty has been linked to increased rates of domestic abuse and can affect any member of the family, as to who may become the aggressor.

Downturns in the economy regrettably cause cases of both domestic violence and poverty to increase. With the increasing financial problems around the world, health professionals and domestic violence experts cannot foresee the levels of violence in intimate partnerships improving anytime soon. Systemic and cultural changes are needed to increase intervention to reduce violence as an outlet, but solutions to poverty are also needed  for long-term reductions in violence.

Although many people imagine poverty to only affect third world countries, more and more average families in developed nations are experiencing financial stress or facing events that cause extreme levels of poverty in terms of income compared to expenses. Families that are struggling with day to day income and expressing suffer from the strain. But, these suffering families will rarely attract the same media coverage as malnourished and impoverished people in other countries; nonetheless, the problems are real, and family violence often results.

The link between domestic violence and poverty and the cycle that results in many families is grim. When the domestic violence cycle begins under these circumstances, many families begin to live an eternal nightmare that seems unlikely to end. The family of an abusive partner that is also very poor, often see no way of escaping the continuous cycle. And the very financial trap that they are in, continues to cause more anger and lashing out.

Victims of domestic violence can be any age, gender, race or religion, and, unfortunately, if you are poor you are more likely to experience the abuse. There are many different consequences to being poor and living with poverty on a daily basis, and one consequence is the far higher rate of instability and domestic violence.

Many of the women in domestic abuse relationships end up homeless due to the combination of domestic violence and poverty they have endured. Domestic violence shelters have seen a vast increase in the number of woman, and children, that have turned up on their doorstep.

Women suffering both domestic violence and poverty sometimes feel there is no housing and financial support to help them to move on with their lives. Both women and men perceive that their are barriers to entry and finding a suitable shelter. These perceived barriers are especially felt by those without financial ability to pay for help. In some cases intimate partners will return back to the abusive relationship, as they see no other way out.

In additional to addressing the issues with adult partners living in these situations involving poverty and violence, the children in these circumstances must be addressed with appropriate protections. Often the children from violent families are forgotten and left to cope on their own, especially where good social services systems are not in place. Such exclusion of children can lead to depression, self harming, and violence as they try to cope with their feelings. The family abuse will then be passed down through many generations as the children grow up to become abusive themselves.

Children of families with systemic domestic abuse grow to believe that abuse is normal, and what all families do to control one another. Often families from poverty will only associate with other families in the same situation as themselves. These negative community connections will reinforce and magnify the fact that everyone suffers in the same way, and that domestic violence is not unusual, but accepted.

The education and support systems need to be improve in all of our global communities to provide services to families that include children and enable children to escape the domestic violence cycle.  With better understanding and the love given by a community of resources, children can learn that the combination of domestic violence and poverty together is not a normal or necessary as a part of life.

Children that are raised in households with both domestic violence and poverty are very likely to abuse others due to the environment they live in. This is an unacceptable consequence. Other terrible consequences also flow from spending childhood in an abusive home.  The education of these children will generally be of a lower standard, and many such children grow up without the ability to read and write or communicate clearly.

Later in life, if any employment is found by these children as they become adults, the jobs will often be very basic, for minimal wage, and often degrading. This plight of poverty from being unemployable in better occupations can lead young people to resignation from feeling purpose for life and feeling as if nothing they do will get them out of the situation they have found themselves in.

Domestic Violence Is a Vicious Outlet for Anger

Poverty and the strains that accompany it can make the people living in a poor household feel frustrated, useless, angry, and inadequate. Unfortunately it is often the other family members who are the outlet for this anger, and through violence a partner prone to aggression and control makes themselves feel better. Often the domestic violence is kept quiet, and the abuser will be full of remorse after every outburst. The wives will blame themselves for the violence, claiming they are not doing enough, or not being supportive of their mate. The environment creates a vicious cycle that many women and men find it difficult to escape from.

If a woman suffering from domestic violence and poverty does manage to escape, they often face many different problems, and struggles in their future. The physiological effects of the violence may destroy any self confidence the woman has. This can lead to them not being able to attend a job on a regular basis. Over 70% of women do not ever report their abuse, making it very hard to stop the problem. Without the correct support, and financial network, often women who suffer from domestic violence will drift from one abusive relationship to another.

There needs to be a larger financial support system to allow people who are suffering with domestic violence to be able to break the domestic violence cycle. For very strong women there are several different steps they can take, however, many women live in fear or financial distress and feel they can't leave. For these women it is hard for them to know what policies, and support would assist them in breaking free. Although the safe houses and support networks that are currently in place are invaluable, these programs rarely offer sufficient financial support to help abused women to move forward, and improve their way of life after the initial few weeks or months.

Some financial help is slowly becoming available from governments to assist victims of abuse who are poor financially.  The many domestic violence shelters and support groups are also trying to help. Unfortunately, the help is often perceived to be too little at present, and in some cases may be inadequate to prevent a person returning to an abusive spouse out of desperation.

One in four women will suffer from domestic violence in their lifetime, and this will increase if the economy does not improve and will also continue if effective programs are not in place to provide a safety net. In addition, efforts are needed to assist shelters to provide ample space and time for abused persons to recover and become financially sound.

Video - One Woman's Struggle Out of Domestic Violence and Poverty

Request Help When Pressure is Too Great

Although the stress that can be caused by economic crisis is extreme, there are several things that the whole family can do to help the tension. Talking about your problems with friends, or family will help you to understand that you are not alone. Seek out the help of a pastor, professional counselor, or support group when your personal support network seems inadequate.

Talk through disagreements before they become heated and may end in violence. Do not bottle up your emotions, and try to remain calm around the people who care the most. Without a financial safety net, you may feel alone, and inadequate to provide for your family. Your emotions will be very high, and tempers will be difficult to control. However, if you ask for help early on you can avoid becoming yet another domestic violence statistic.

Domestic violence and poverty can affect everyone, and, if violence has crept into your difficult economic situation, you need to act to ensure that it doesn't destroy you or your children.